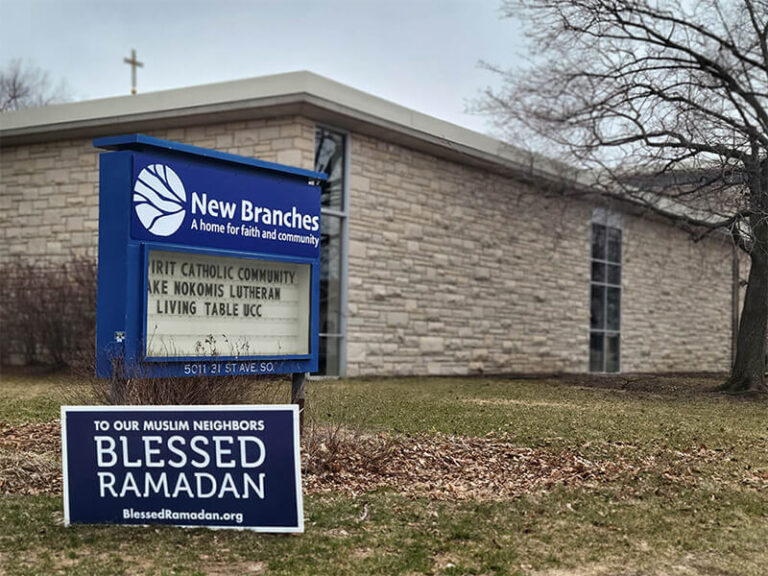 Today, in a periodic feature that is a collaboration between him and Ann King, meet Greg Owen.

We all know that Greg Owen is a particularly active member of Living Table UCC and of New Branches. He was part of the Discernment Team, a member of the group that helped form the Multi-Church Initiative, and one of the first people to serve on the New Branches Board of Directors. At present, he facilitates the New Branches Property Team. But our church group is not the only organization Greg helps to run. He has been much involved in the recent merger of House of Charity and St. Stephen’s Human Services into an organization named Agate Housing and Services, where he now serves as chair of the board of directors.

Like so many in our community, Greg believes service is important. That belief enabled a couple of engaging professors he had during his senior year at the University of Vermont to lure him away from an emphasis on pre-med and chemistry to a major in sociology. He completed his graduate training in sociology at the University of Minnesota, where he earned a Ph.D. in 1982. While working on his dissertation on hospice care in 1979, he was hired by the Amherst H. Wilder Foundation to direct a study of the need for hospice care in Ramsey County. That assignment turned into a 40+ year career at Wilder Research in St. Paul, where, with the help of many colleagues, he initiated Wilder’s Statewide Homeless study. What began in 1982 as the first survey of people experiencing homelessness in St. Paul turned into a statewide study of homelessness in 1991. This detailed study engaged volunteers from throughout the state to conduct one-on-one interviews in hundreds of locations with people all over the state. On the 23rd of October that year, and every three years afterward, interviews were conducted with people in shelters, on streets, in camps, on friends’ couches, and in their cars. All survey participants received a small stipend, and the information was used by shelters and housing programs throughout the state to document the needs of those who were homeless and support hundreds of grant applications. Not surprisingly, a number of members of Living Table became part of the data-gathering team. The triennial surveys continued until they were interrupted by Covid in 2020. The next survey is in the planning stages now.

Because of Greg’s knowledge of homelessness, he was recruited in 2018 to be on the board of House of Charity. The House of Charity had its start in 1952 on Nicollet Island in Minneapolis. Started by a lay person known as Brother de Paul, House of Charity came to serve the needs of the poor in Minneapolis by providing food and shelter. Eventually the free meals, offered every day of the year, were served out of the Food Centre on Park Ave. House of Charity also ran a thrift store during its early history and hired staff from among the people it served, giving them a start toward self-sufficiency. By 2018, it ran a variety of services for those experiencing homelessness, including a board and lodging residence located at 510 S. 8th St. in Minneapolis. Government funding and generous donors helped House of Charity open a new 61-unit supportive housing program in 2019 known as Park 7, located near the Hennepin County Medical Center. When the pandemic began the next year, operations became more difficult, revenue decreased, and House of Charity began to consider whether merger with another nonprofit with a similar mission might put the organization on a more solid footing.

It found a potential merger partner in St. Stephen’s Human Services, a social service agency that had been started in the early 1970s by St. Stephen’s Catholic Church (from which New Branches member St. Stephen’s Catholic Community derived) in response to neighborhood poverty and homelessness. Operating as a separate nonprofit, it had built up a premier team of emergency-shelter and street-outreach staff but was having trouble landing a permanent executive director. Its board, too, was considering the potential benefits of merger. Greg joined the merger team and was able to make use of facilitation and leadership skills honed at Wilder to help bring the merger to fruition on January 1, 2021.

Covid, and the challenge of bringing staff together from two quite different organizations, made the initial year difficult. Several key members of the board and staff from both organizations left for various reasons, which put a lot of pressure on those remaining. An interim executive director filled in while House of Charity/St. Stephen’s conducted a search for a permanent director. Greg served as co-chair of the merged boards in 2021 and, beginning in 2022, was elected to serve as chair. By early 2022, the merged organizations were working together, but they still had no permanent executive director and no new name. A consulting firm that had been hired to rebrand them had come up with a list of names, but staff members disliked the initial choices. So they put together a committee of staff members from each of the two legacy organizations, and the name they chose, Agate Housing and Services, was approved by the board.

The newly merged organization also faced other challenges that year, including a January fire at the Food Centre on Park Avenue and a failed executive director search. The fire immediately closed down Food Centre operations, and the failed search required another entire round of nationwide recruitment. Despite the fire, Agate was able to arrange for people to be fed from the kitchen of First Covenant Church, just a block away from the original site. And within just a few months, the second search process identified a good number of qualified candidates. Throughout all of this, the communications team and the development team had to be sure that all the donors, government supporters, and grant-makers were kept up to speed on all that was happening and, at the same time, needed to continue soliciting funds to support operations.

Finally, in May, the website announced the organization’s new name and shortly afterward the hiring of a new executive director, Kyle Hanson, who was serving as chief strategist for Minneapolis Public Housing and was well-acquainted with issues of housing and homelessness. Greg expects that Kyle’s thoughtful approach, his background as Lutheran pastor, and his ability to bring people together from all backgrounds will be helpful in strengthening services and working out the remaining kinks in the merger. He starts July 18. In the fall, he and Greg, along with senior staff and other board members, will begin work on a new strategic plan.

Currently, the Food Centre on Park Avenue is being rebuilt. Greg says that when it opens (probably by October), he will invite members of the New Branches churches to volunteer to help in the kitchen and serve food at the daily lunchtime free meals, giving members of all of our faith communities an opportunity to meet and serve those who are homeless in our community.

Meanwhile, Greg will be involved on the Property Team at New Branches, do occasional projects for Wilder, continue his board work at Agate, serve periodically on the State’s Human Services Research Review Board, and spend lots of time with Phyllis, his children and grandchildren, and his dog, who has agreed to continue taking Greg on daily walks.

Posts from the office are from church staff and leadership at Living Table United Church of Christ in Minneapolis. We are so glad that you are here. Welcome.

Unless otherwise specified, all content on this site is original work and is copyrighted by the author, when designated, or by Living Table United Church of Christ, when no author is specified. This means that you cannot copy-and-paste content from this website to reuse it elsewhere, without express written permission. Brief excerpts up to 30 total words may be quoted with citation and a link back to the exact URL from which the brief excerpt is quoted. All images are copyrighted and may not be used elsewhere. For all other uses and with any questions, please contact us. You can still share everything from this site by sharing a link to the exact page of interest. What is prohibited by this policy and standard U.S. copyright law is reusing or republishing our content elsewhere.

What is Living Table?

Living Table is a community of people who are on a spiritual journey. We seek to follow the radical teachings of Jesus that focus on liberation and justice for all peoples. We have a diversity of perspectives on who Jesus is and was, but we are committed to embodying the love he taught, love of neighbor and self that is unconditional.

We are a group of believers, seekers, followers, and skeptics. We firmly believe that all people have a place at God’s table. Therefore, each Sunday we celebrate that Christ is the host, Christ sets the table, and Christ welcomes all.

Have you signed up for Table Talk (our weekly email newsletter) yet?